As Christians, worship is a central part of how we live our faith. Though our whole lives can be a form of worship, coming together as a community creates a special atmosphere where a connection with God is experienced individually and together. We seek to provide all of our members and guests an opportunity to experience such a connection with God and one another.

Our worship services are a blend of traditional hymns, contemporary praise and gospel music along with a Bible-based sermon. They usually last around an hour and 15 minutes. Sunday school is held at 10:00 with classes for adults, youth and children. There is a nursery for children ages 3 and under during worship. You don’t have to stand up and be introduced or come forward for any reason. And you don’t have to put anything in the offering plate just for visiting SPUMC. There’s no reason to feel uncomfortable!

What should I wear?

There is no dress code at SPUMC. Please feel free to wear whatever you’re comfortable in…whether it’s jeans and shorts or suits and dresses.

Is there a Nursery available?

Yes, our nursery is available during worship. If you are standing in front of the sanctuary doors, the nursery is the to your right. Go through the double doors and you’ll find the nursery in the first room on your left. The restrooms are right across from the nursery.

What do you have for my children?

We have Sunday School classes for all ages. Our children’s ministry – kids in kindergarten through 5th grade – meets regularly for missions and fun events. For teens, we have a youth group for grades 6-12. They also meet on Sunday nights for youth group that includes snacks, a program and fellowship.

How can I find out what is going on at SPUMC?
Listen to any announcements made on Sunday mornings, look at the screen announcements before Sunday worship in the welcoming center and in the sanctuary, go to the Welcome Table just outside the sanctuary, and read the Sunday worship bulletin.
Can I participate in communion?
All who profess a faith in Jesus Christ are welcome to partake in communion, which we usually offer on the first Sunday of each month.
What do United Methodists believe?

United Methodism started with the evangelical revival in the 1700′s with John and Charles Wesley in England and Francis Asbury in America.  Today more than 54 million people use the term “Methodist” as part of their church fellowship, all springing from John Wesley.  About 11 million of these are United Methodists.

United Methodists are a diverse people of culture, race and geography.  While we trust free inquiry in matters of Christian belief, we acknowledge the primacy of the Bible in our doctrine.  Scripture is interpreted in the light of Jesus Christ.  Our faith is guided by the 2000 year Christian tradition, the inner witness of the Holy Spirit and our God-given capacity to reason.

We are mission-oriented, supporting thousands of missionaries in many countries of the world, and working closely with other Christian denominations in missionary service and relief.  We support numerous hospitals, nursing centers, colleges and children’s agencies.We believe the message of Jesus Christ our Savior and Lord should change and heal personal lives, but we also believe Christ’s ministry has a social dimension.  Believing in a God who created the earth, we believe we are to be His caregivers for the water, air, soil, minerals and all living things.  We believe in a committed marriage and family life and affirm the integrity of single persons.  We believe in fairness toward everyone regardless of race, gender or nationality.

If you want to be part of a community where you are cared for, where you desire to give of yourself in service; if you want to join a community of imperfect persons struggling to meaning, then Summerfield Peace United Methodist Church just may be the church of you!

Will you join us at Summerfield Peace United Methodist Church?

We incorporated and officially changed the name of the church to Summerfield Peace United Methodist Church, Inc. on January 1, 2018. 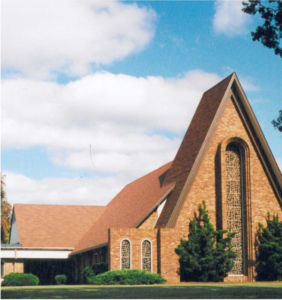 The earliest meetings of SUMC took place in a thatched arbor near the Old Brick School in a field off Scalesville Road. On one hot Sunday afternoon, Rev. Archie Bowles, the first minister, told the congregation, “Brethren, I will not preach again until you build a church!” So the people purchased land across the street and built a wood-frame sanctuary on the same plot of land where the church is located today. The building has gone through numerous changes over the years to become the church we know today. The membership has grown and programs to encourage Christian growth have been added through the ministry of 37 pastors. 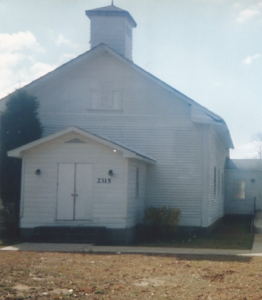 Peace church began as a place for children to go in the Summerfield community to learn. Historical records of Guilford County indicate that a group of Quakers used the original sanctuary as a school house. The Quakers were later persuaded to allow members of the Negro community to purchase the building to serve as a place to worship. During the early years of the church, when it was known as the Summerfield Colored Methodist Episcopal Church, services were only held on the first Sunday of each month. In the mid 1960’s with the advent of the Civil Rights movement and desegregation, all Methodist churches (Negro and White congregations) were united to form the United Methodist Church. During this period, the church was renamed Peace United Methodist Church.

Early October 2015
Our District Superintendent, Nancy Rankin, reached out to Rev. Lee to discuss the situation at Peace UMC. Their pastor, Roger Green, was thinking about retiring and instead of keeping Peace UMC open on a charge with Zion Hill UMC (20-25 minutes away), she felt it would be a great opportunity to merge with us. This was a proposal she emphasized and asked that we consider it.

October 18, 2015
We had a called Ad Council meeting after worship, and Rev. Lee explained the District Superintendent’s proposal

December 1, 2015
The Ad Council met with the District Superintendent to discuss the merger, and she laid out the steps of a merger. This was followed by an open discussion where many questions and concerns were answered and allayed.

December 6, 2015
The news of the merger was reported to the congregation of SUMC in a town hall-styled meeting. Due to Rev. Green’s surgery and rehab, we were also able to have some joint services with Peace UMC during the months of December and January, capped off by a covered-dish Celebration on Jan. 31, 2016

January 30, 2016
Both churches were invited to take part in a wonderful retreat to learn about what it would mean for our two churches to come together. Cindy Thompson, of Boundless Impact, and Dana Lyles came in to facilitate.

February 21, 2016
The Ad Council met to take a vote of confidence on the proposed merger. The District & Conference Offices both needed to know of our intentions on the merger in order to make appointments for the upcoming season. The Council voted unanimously to go through with the merger.

March 17, 2016
We had a Charge Conference at SUMC and voted yes to the merger

March 31, 2016
Peace UMC had a Charge Conference and voted yes to the merger

April 11, 2016
A Transition Team, made up of members from both SUMC and Peace UMC, will met for the first time. They will continue to meet twice a month through July and likely for the next year or so.

May 9, 2016
The Transition Team met with leadership of Woodmont UMC, a church in Reidsville that recently went through a merger. The meeting took place at Mission First (their Mission & Ministry Center – which used to be the church that they merged with).

May 23, 2016
We had a combined meeting of the Transition Team and the Administrative Council. Jason Jarrett led the meeting, focusing on specific aspects of our merger with Peace UMC -leadership structure (how can we make it workable?) and governance (what will our merged leadership look like in the coming months?)

July 1, 2016
The merger is official! Peace UMC is now a part of Summerfield UMC.

We would love to get to know you and help you get connected at Summerfield Peace UMC. Contact us below.